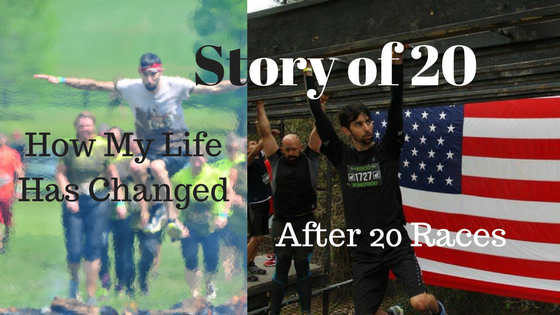 It’s funny writing this post after I recently completed my 21st race (Mud Titan 8 in Plant City, Florida), but that doesn’t change one major fact: my life has not been the same since I started this journey.

Let’s start from the beginning:

In April of 2014, I was sitting in the conference room at my job’s end-of-week meeting where we went around the room and shared how things went. My boss liked to do these meetings to recap the week and discuss plans for the future, both professionally and personally. He was very good about getting all of us involved in helping each other with what we hoped to accomplish. (Just so you know, this was a small company of eight team members at the time, including the CEO, so this was not as time consuming as some might imagine.)

It was on this particular Friday when he asked everyone, along with recapping their week, to share something they plan to do to improve their personal health. When it came to me, I shared that I was thinking about trying a mud run, so I would have to start training for that. This was supposed to be an excuse to start working out again since the generic goal of “get healthy” was too broad. The following Monday, it turned into a thing where I was periodically asked by various teammates how things were going. “Have you started running?” “You hit the gym?” “This might be a good idea to try…” and so on. And it was like that every few days or so for the next two months until June 14, 2014, when I took on my first Rugged Maniac.

I didn’t preregister, so I spent 80 bucks the morning of, plus 10 bucks parking, and signed up. (I wrote a whole blog about my first experience at Rugged Maniac here.) I took pictures, did one quick video to prove I was there, and wore my finisher shirt on Monday proudly.

When I initially decided to go out for Rugged Maniac, and as I kind of hinted above, it was supposed to be an excuse to start working out again. When most set fitness goals, it’s always something hugely lofty, like “get healthy,” and that lack of tangibility makes it difficult to achieve. So I thought training for a race was more achievable. And it worked. I went to the gym at my apartment complex three to five days a week, rotating between treadmill runs to rebuild endurance and weight training to build strength. I finished Rugged Maniac somewhere between an hour and an hour and fifteen minutes. Not bad for a first try. But then something else hit me that I oddly didn’t expect to happen…

Rugged Maniac is a great first race because they know how to remind people that you’re out there to have a good time. And I had a blast! The post-race party, the accomplishment of getting through the course, the pictures, the free beer, the music! It all was more fun than I’d had in a long time. I don’t know why I didn’t think I’d have that much fun, but I did.

Then the change happened…I started looking for more.

Later that year, I ran my second race, the American Mud Race. The was the first time I started analyzing organization’s efforts to put on an event like this. This time, my dad came out with his camera and took pictures. This was the dirtiest finish to date that I had. But again, I felt like I wanted more. But that would have to wait…

After the clock struck midnight for 2015, I decided I wanted to do more races than the previous year. I had a few in mind early in the year, but none panned out. But when I saw Rugged Maniac was coming back to Florida, I couldn’t resist signing up again. At this point, I also started to count how many races I had done. So Rugged Maniac 2015 became the third. Space Coast Mud Run became four. Savage Race (my first time venturing out of the 5K distance) became five. Insane Inflatable 5K became six. I doubled the number of races from the previous year. And as you can guess, I still wanted to do more.

Another interesting change that took place was a change in careers. While I started racing as a marketer, I discovered that I missed the classroom, so I returned to teaching. My students LOVED hearing about my racing adventures and enjoyed it when I brought in my medals to show off. And this motivated me even more to want to push myself, doing more races.

In all of 2015, I ran four races. By May of 2016, I matched that amount. Warrior Dash in February (seven), Savage Race in March (eight), Rugged Maniac in April (nine), and then the AIDS Orphans 5K Mud Run in May (ten). My tenth race also had nearly my whole family out enjoying the race since it was local for them, and had my muddiest finish at that point.

That is when it finally hit me:

This is no longer a hobby. It’s a lifestyle.

Obstacle course racing had officially become a part of my life. And I continued to seek out ways to push myself. I finished off 2016 with the Melbourne Mud Bash (11), Bone Frog Challenge (12), another Savage Race (13), and another Insane Inflatable 5K (14). I once again double my total number of races for the year, and decided I needed to set more goals for myself. My 2017 goals were set to change my way of looking at this sport.

First was to run my first competitive wave at Warrior Dash (15). (I have a whole series about preparing for this, in case you missed it.) But then I decided to volunteer for and run Terrain Racing (16) and take on another Bone Frog Challenge (17). Those all occurred within three weeks.

My second goal was to shoot for a Spartan Race Trifecta. Along the way, I ran my fourth Rugged Maniac with my girlfriend and two friends (18). I also completed my first Spartan Race, the Sprint distance in Miami (19).

After the Miami Spartan Sprint, I enjoyed my summer vacation (probably more than I should have), and realized that my next race would be my 20th OCR. And it turned out it was going to be a big one: Spartan Race Super in Fayetteville, North Carolina. My second on the way to the Trifecta. My first out-of-state race. And my longest distance to date at 8.3 miles. (I already talked about Spartan Race Super in a previous blog; check it out if you haven’t yet!)

When I crossed that finish line and received my medal (and Trifecta wedge), it dawned on me how far I’ve come since that fateful day in my meeting where I said, “I think I might try a mud run.” From random excuse to get myself back in the gym to full-on lifestyle change, 20 races has taught me a lot about myself. It has taught me the importance of self-discipline since I know what happens when I don’t train probably. It has taught me about personal limitations and how often they are simply temporary. It has taught me about personal confidence and how the one thing typically separating me from accomplishing each obstacle is my own brain being in the way.

But most importantly, it has taught me that the only way to ever improve in life is to push myself. This is a lesson I often wish I learned when I was 15. Perhaps I could’ve finished in the top 20 of my high school class or gotten better at balancing school work and sports so I wouldn’t have to quit cross country my freshman year. But we can’t go back and change the past, so instead I use this lesson for my future.

This is the lesson that made me take the chance to ask out a girl who I am now looking at spending the rest of my life with. This is the motivation I used to go for the teaching job I wanted and I’m seeing a major upswing in my career (granted my girlfriend also helped push me with that, but still my point stands). And it is what’s helped me start a club at my school for students who are also looking to push themselves in the same way that I did three and a half years ago.

But perhaps the most exciting part about 20 races: I know I’m not even close to being done. As of this writing, I actually completed OCR number 21, with plans of Spartan Beast later in the year, plus possibly two more with the new OCR Club at my school. If that works out, I’ll complete this year with 10 races in 2017, and 24 races overall.

Then I get to spend some time thinking about a question that makes me (and should make anyone) excited to think about: What’s next?